Alaska’s State Flower – Forget Me Not 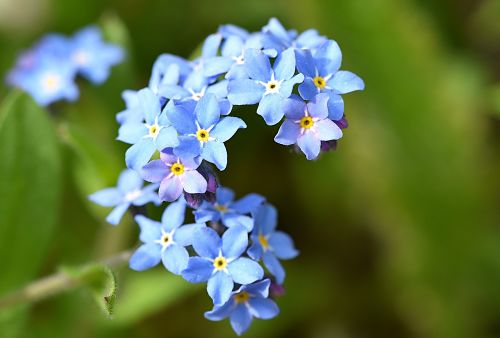 Alaskans believe that their state flower, the alpine forget-me-not (Myosotis alpestris) is symbolic of the spirit of the state's pioneers; after all, they were the ones who originally selected the small, blue-flowering perennial to represent their new home.

Alaska's forget-me-not is common to the alpine meadows, open forests and stony areas of the state. A member of the borage family, it grows to 8 inches in height and bears small, true blue flowers in summer. The flowers have five petals and a yellow center. Forget-me-nots bear fuzzy foliage and grow in clump.

It's no wonder that the Forget-Me-Not was chosen as the state flower of Alaska, as this hardy bloom will flourish in even the harshest conditions. A touch of sunlight and a bit of moist soil, and the Forget-Me-Not will be growing with ease. For the most part, this flower prefers a cool, temperate climate.

Gardeners who are hoping to plant Forget-Me-Not seeds will only need to do so during the first year that they introduce this plant in their garden. For those that want a blooming plant during the following season, seeds should be planted in August. It is ideal to plant these seeds in a spot where they will receive south- or east-facing light.

Once planted, moderate watering will encourage the seeds to grow and flourish. The flowers do bloom and die within the same season, but at the time the plant dies it spreads its seed, often scattering more beautiful Forget-Me-Not plants in the area. Generally, reseeding is not required because of this plant's fertility, and each year will bring additional wild blue blooms to the garden.

Alaska's forget-me-not thrives in full sun areas of the garden. Give it gritty soil to which you've mixed in some leaf mold or compost. When planting more than one, which is recommended by horticulturists within the state, plant them at least 8 inches apart. Keep the soil slightly moist at all times.

Cultural Alaskan History of the Forget-Me-Not

The Klondike gold rush spawned the Grand Igloo, a group of men that wrote the forget-me-not into their constitution as their official flower. The Igloo's women's auxiliary followed suit with their constitution. When it became obvious that Alaska was headed for territorial status, both groups naturally felt the flower would provide the best emblem for the Alaska territory. In 1917 both groups got their wish and the little forget-me-not was signed into law as the official floral emblem. Ten years later the blue beauty emblazoned Alaska's flag.

Alaska first became a U.S. state in 1949, at which time the Forget-Me-Not was officially adopted as the Alaska state flower and floral emblem. However, this blue bloom that grows up to 12 inches in height had long been a cultural symbol in the region. Pioneers that arrived in Alaska at the end of the 19th century declared the Forget-Me-Not as an important symbol with the region, and in 1917, the flower was determined to be the official flower of the newly-designed U.S. territory of Alaska.

Today, the Alaskan flag bears a blue background, a distinct constellation and the North Star. The blue background of the flag is said to pay tribute not only to the sky, but also to the Forget-Me-Not flower that has meant so much to the Alaskan people for so long.

Medicinal and Gardening Uses for the Forget-Me-Not

In the landscape, the alpine forget-me-not is ideal for inclusion in a rock garden, wildflower garden or meadow-themed garden.

As with many of the plants and flowers that bloom in wild areas, the Forget-Me-Not is an herb that has sometimes been used for medicinal purposes. It is important to recognize that these medicinal uses may not be ideal for all people, and that anyone who is interested in using the Forget-Me-Not as a medicinal herb should work with their physician to verify that it is the best treatment option for them.

Medicinally, the entire plant is valued for its astringent properties. Dried and ground into powder, it has been applied to wounds, and an extract from the plant's foliage was used for bloody noses.

The Forget-Me-Not plant has long been used as a treatment option for lung conditions as well as frequent nosebleeds. It is important to use care and caution when using plants as an herbal supplement or medicinal treatment, because preparations of the herbs can release chemicals that may increase the risk of cancer, liver disease or other conditions.

As with any type of treatment option, people should work with the health care provider that they trust in order to decide if an herbal treatment or conventional medication would be the best path forward.

When the Forget-Me-Not blooms on the mountainside, it's clear that summer is in full swing in Alaska. This time of year, when the daylight hours wane long into the nighttime, is the perfect time to get out and explore the wilds of the state. For more information on the best things to see and do in Alaska, contact an experienced real estate agent today.