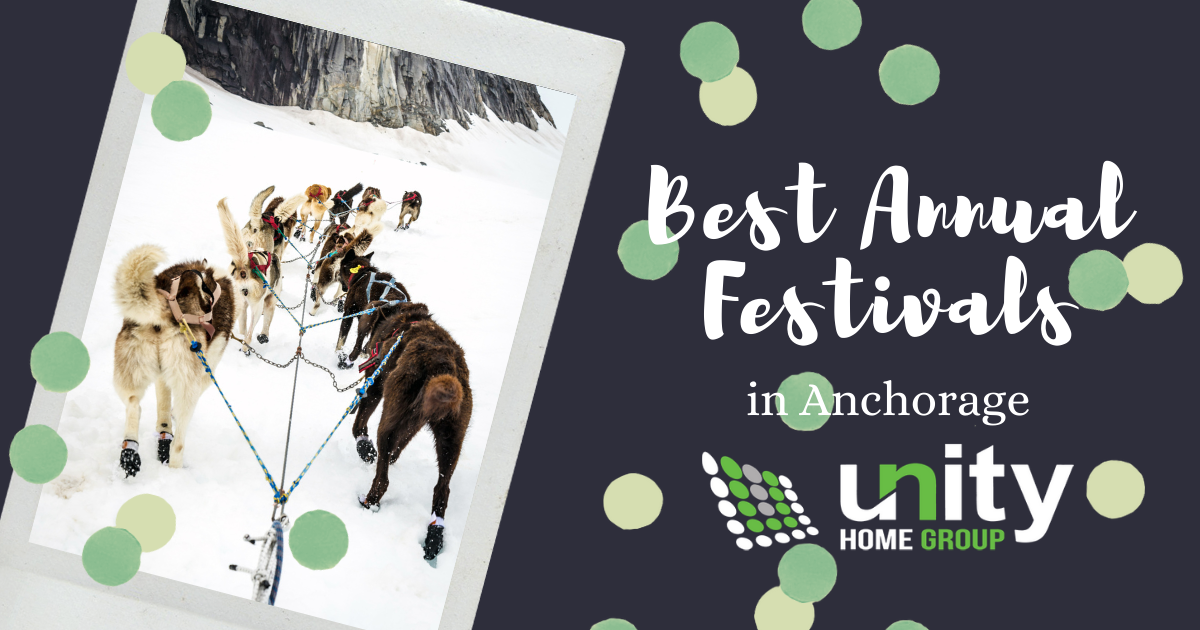 While Alaska is largely covered by chilly tundra wilderness, its people are vibrant and have many opportunities to enjoy outdoor activities and seasonal festivals, even when the year is at its coldest. Here are some of the spring, summer, fall, and winter festivals in Anchorage, Alaska, that residents and tourists flock to and how to best enjoy them.

Spring in Alaska usually arrives in April, as March is still too cold for the ground to begin thawing. This also marks the start of the unofficial spring season, known as "Breakup" to native Alaskans, when the winter snow and ice melt and transform. May marks the beginning of the real changing seasons; in May, Alaska only dips down to a relatively warm 40 degrees Fahrenheit (4 °C) to a peak of 55 degrees Fahrenheit (13 °C). This is the time when residents begin to head out of Anchorage's townhomes to enjoy the spring festivals. 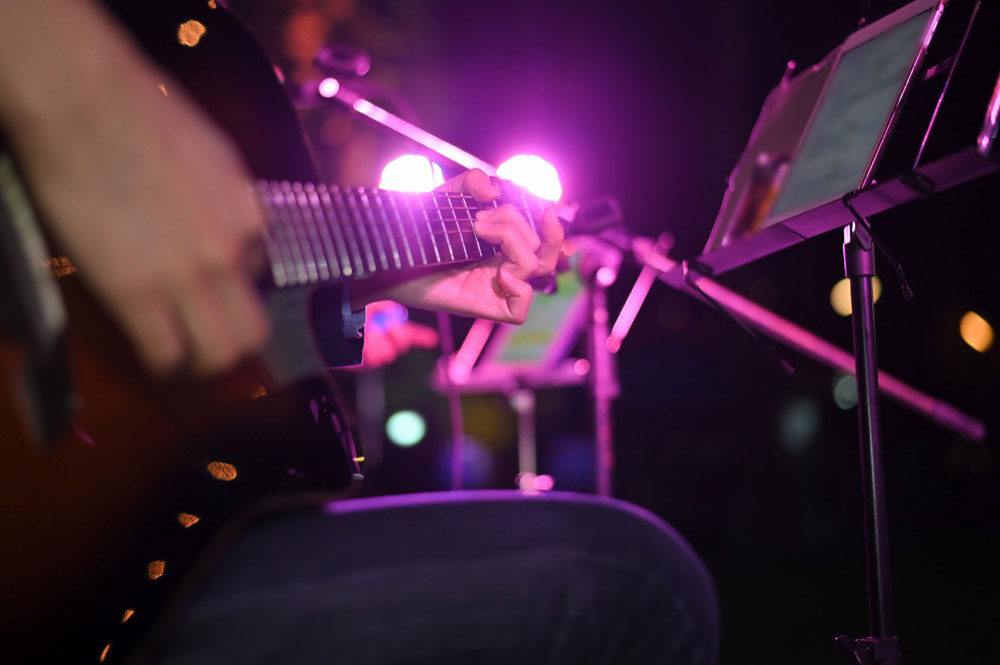 The Anchorage Folk Festival, Inc. is a volunteer-run charitable group that organizes and hosts the annual Anchorage Folk Festival in Alaska. Via performance and education, the organization wants to help foster a love of music and dance in the community. The popular festival offers free opportunities to sing, attend classes and jam sessions, or enjoy the festival's 140+ performances.

The Anchorage Folk Festival's main goal is to run and maintain a yearly folk arts festival in Anchorage that features live music, dance performances, and storytelling by the widest possible range of community artists and educate the community about folk arts.

Individual runners and groups of all different sizes come to Anchorage every year to run the Anchorage Mile. They may participate in other runs offered during the festival, from 5K to 49K. Anchorage RunFest takes pride in maintaining its reputation as world-class running enthusiasts by providing a memorable Last Frontier athletic experience for participating athletes, volunteers, and supporters. Running in Anchorage is an inspiring experience, thanks to Alaska's majestic mountains, rivers, and natural wildlife.

Between the middle of May to the beginning of September, the days in Anchorage are long, the weather is warm, and the summer tourist season in high gear. Coats give way to short-sleeved shirts, and shops that were closed for the winter reopen with zeal. Summertime in Anchorage brings over 19 hours of sunshine each day, making it ideal for residents to leave their Anchorage mountain view homes and enjoy the mountains in person with outdoor sports and numerous summer festivals. 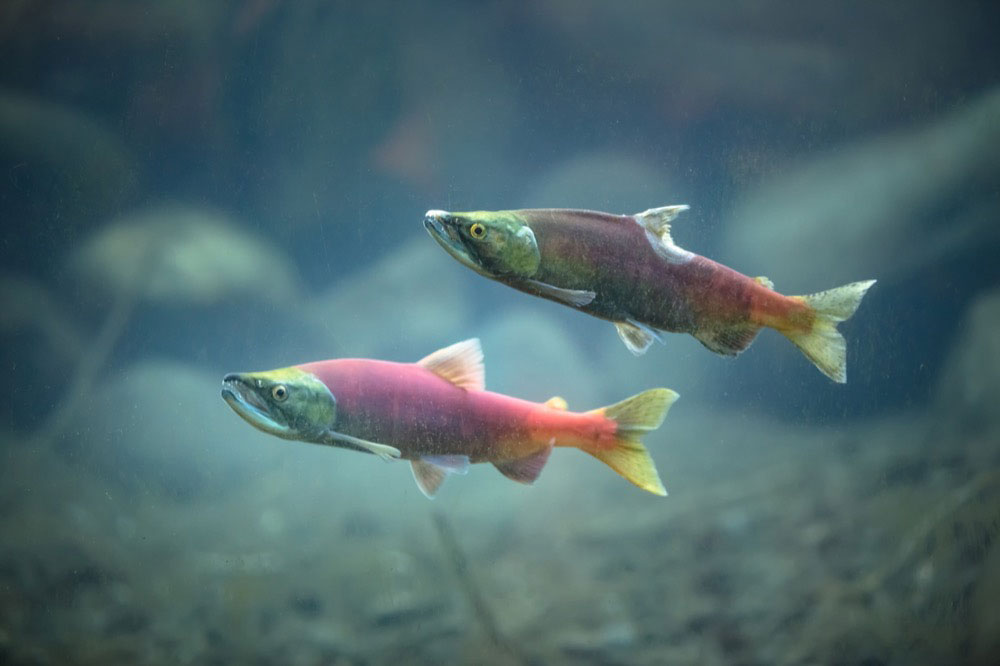 The Seward Silver Salmon Derby, which began in 1956, is Alaska's oldest fishing tournament. The championship usually starts during the second week of August in Seward, Alaska. Anglers compete with each other to catch the biggest coho salmon, also known as silver salmon. Every day, the fish are weighed and brought in.

Catching a fish that has been tagged or catching one of the biggest fish will earn you a prize. Before the start of the derby, fish are caught and tagged. Catching a tagged fish could win you up to $50,000 in prize money. The 25 largest fish caught are eligible for various awards, with the heaviest fish receiving up to $10,000 in cash and the weight of the fish in Kaladi Brothers Coffee.

The Girdwood Forest Fair is a popular family-oriented festival every year in Girdwood, Alaska, a tourist-centric town about 36 miles to the south of Anchorage. Alaskan artists, handcrafted pieces, native cuisine, and entertainers from all over Alaska are featured at the Forest Fair. The Forest Fair Parade starts off the excitement and draws together the best entertainers and artists from Alaska and worldwide to celebrate original compositions and a diverse range of musical styles.

The Forest Fair is essentially nestled in the forest, and it's important to understand that Alaska is considered bear country. Food and litter can attract bears that live nearby. Vendors and visitors are advised to use caution and take actions to reduce the chance bears will be attracted to the venue.

The Anchorage Downtown Partnership hosts the popular annual Summer Solstice Festival every year in Anchorage, Alaska. The event is suitable for all ages and is proud to host various entertainment, including music, dancing, and activities for children.

This year, the festival is hosting a UDC dance performance and class and a salsa class by Anaya Latin Dance in the town square. Peratrovich Park will host multiple engaging activities for kids, Timbre music, and a smaller UDC performance. G & E streets will feature several beer gardens, and in the Mayor's Lot, there will be a 3-on-3 basketball tournament hosted by Tru Game. Additionally, an After Hours Party will be located on 4th & Gambell in East Anchorage.

Tourist season in Alaska is essentially over by the end of September. The majority of Anchorage businesses operate seasonally and close down for the winter just after Labor Day. Fall is an in-between season in Alaska, as the summer excitement is over, but the winter fun has yet to begin. The nights start to get longer, and the weather turns chilly and may even snow. Salmon runs are done, and bears are getting ready to hibernate. Still, there are some good fall festivals in Anchorage to enjoy while waiting for winter. 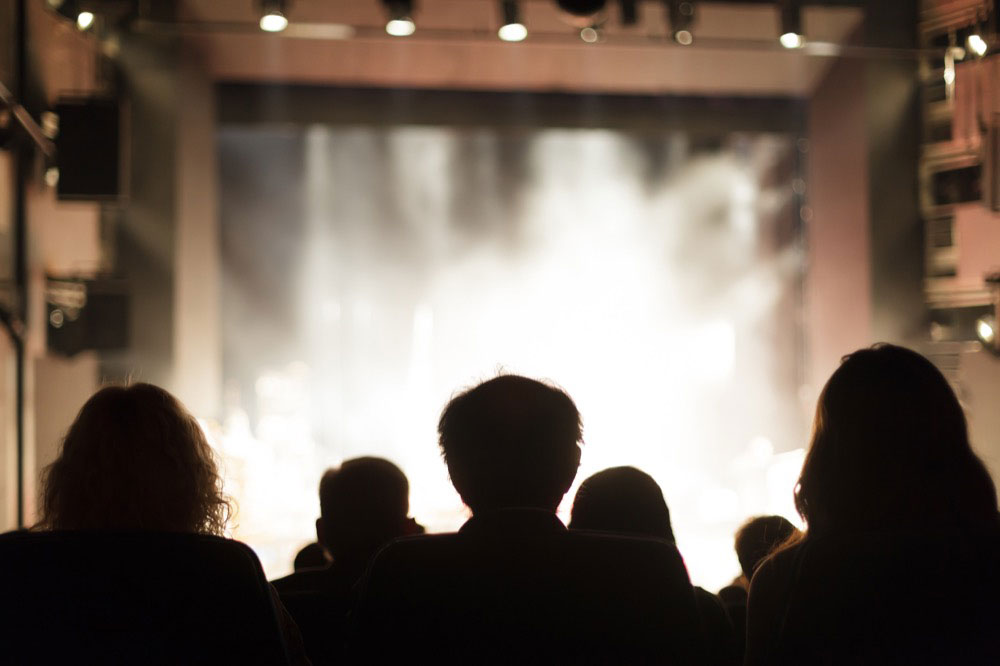 The Anchorage International Film Festival, also called the AIFF, is Alaska's biggest film festival. It was created in 2001 to bring indie and foreign films to Anchorage and showcase Alaska's high-quality film projects. The Anchorage International Film Festival aims to create, encourage, and maintain a film celebration that promotes emerging media and independent filmmakers in Alaska and globally while enhancing the entertainment and cultural opportunities for Alaska residents.

The AIFF frequently serves as a showcase for the film work of Alaskan indie filmmakers and provides an opportunity for independent artists to network with those already in the media industry. Several films that have won jury awards at the AIFF in years past have gone on to win awards at major film festivals, including the Academy Awards, the Seattle International Film Festival, Hot Docs, the Sundance Film Festival, Tribeca, and South by Southwest. Categories included in the film festival are documentaries, features, shorts, super shorts, films made in Alaska, animation, feature screenplay, and youth and family programming.

The Make It Alaskan Festival is proud to feature anything and everything "Alaska." It's an excellent opportunity for local small businesses to get one-on-one time with their target audiences and to showcase their company branding within the community. The festival features wares, live music, fresh food, and much more, all with a distinct Alaskan theme.

Visiting the Make It Alaskan Festival lets attendees have a taste of everything the great state of Alaska has to offer. Being that it's the largest state in the U.S., that's quite a lot. The Make It Alaskan Festival is an annual promise of a fun Alaskan fall weekend with food, music, and entertainment for all ages. Browse a large selection of locally crafted products like soap and candles, clothes, art, housewares, etc. The festival is hosted by Alaska Genesis Productions Inc. and boasts over 120 booths for vendors to showcase their wares.

Although winter can be brutally cold in Alaska, it's also beautiful. Snowfall is consecutive, and residents are keen to stay inside their Anchorage luxury homes or apartments to stay warm. However, there's lots of fun to be had with winter festivals in Anchorage. 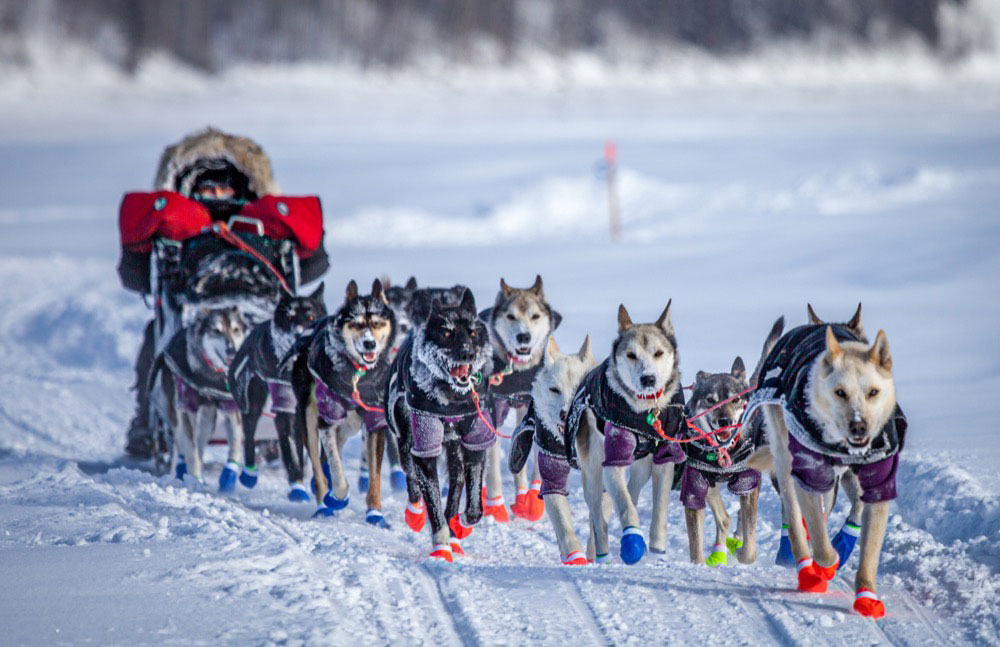 The Iditarod Trail Sled Dog Race is a yearly long-distance sled dog race in Alaska in the spring, traditionally beginning the first Saturday of March. Mushers and a crew of 12–14 sled dogs traverse the Alaskan terrain in several days, usually between 8 and 15, but sometimes more. At least 5 sled dogs need to be on the towline when they reach the finish line.

This 1,100-mile race was conceptualized by Joe Redington and first held in 1973, with the first winner taking almost three weeks to reach the finish line. Redington sought to organize the Iditarod primarily to save the sled dog tradition, the Alaskan husky breed, and protect the historic Iditarod Trail (running through the state between Seward and Nome) and the 1925 Serum Run trail. The race itself is a recreation of the freight route to Nome, celebrating the place sled dogs hold in Alaska's history.

The annual Fur Rendezvous winter festival, also known as Fur Rondy or "Rondy" in Anchorage, Alaska, is an important part of the city's culture and history. Anchorage used to be just a small town of around 3,000 residents in the 30s, with early housing only stretching along Park Strip and Ship Creek. Winters were harsh, and most people spent their days stoking fires, shoveling snow, and battling the elements.

Fur Rendezvous' founder, Vern Johnson, was a personable, excited Anchorage resident with a good understanding of the social conditions for Alaskans. He and a few friends agreed to organize a three-day winter festival that would occur simultaneously as the arrival of trappers and miners with their haul. The first Fur Rondy included basketball, wrestling, baseball, skiing, and dog sled racing. There was also a bonfire and torchlight march that drew almost the entire city of Anchorage.

Fur Rondy has grown to become the city's favorite cold-weather festival. The Fur Rendezvous has faithfully embodied Alaskans' adventurous spirit since 1935, providing fun and exciting entertainment for people of all ages. More than 70 events are held throughout the festival, ranging from traditional to wacky, and include outdoor hockey, snow sculpture carving, snowshoe softball, and porta-potty racing on skis, to name just a few.

For over a quarter of a century, the city of Anchorage has celebrated unique craft beers and delicious barley wines from across Alaska and throughout the globe with a festival unlike any other. In partnership with Peak2Peak Events, the Brewers Guild hosts the Alaska Craft Brew & Barley Wine Festival, which operates annually from Friday, Jan. 31 to Saturday, Feb. 1. This social event is one of the most popular and eagerly anticipated in Anchorage and focuses on producing the highest quality and best tasting barley wines and beers available.

At the festival, Anchorage residents and guests can enjoy multiple craft beer tastings and cultural events like dance, music, and other types of entertainment. Naturally, Alaskan native foods and those that go well with beer are abundant. Residents can expect to have a great experience whether they are passionate about craft beer or want to come out to enjoy the food, drinks, music, and shows.

Every Season Has Its Time to Shine In Alaska

Each season brings something unique to the table in Anchorage, be it crystalline snow, golden fall leaves, or a beautifully clear 20-hour summer day. In addition to salmon fishing, hiking, boating, swimming, sledding, and other activities to enjoy, residents and tourists alike don't want to miss the fun festivals America's 49th state offers.

If Anchorage is calling to you, contact Unity Home Group of eXp Realty with AK Home Show at (907) 531-2540 to get in touch with an Anchorage real estate agent and find your Alaskan dream home today. 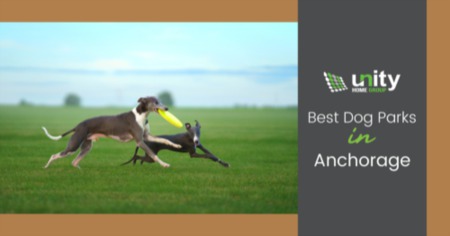 Anchorage is Alaska's largest municipality. About 288,000 people reside in the city, representing about 40 percent of the state's population. ...Read More