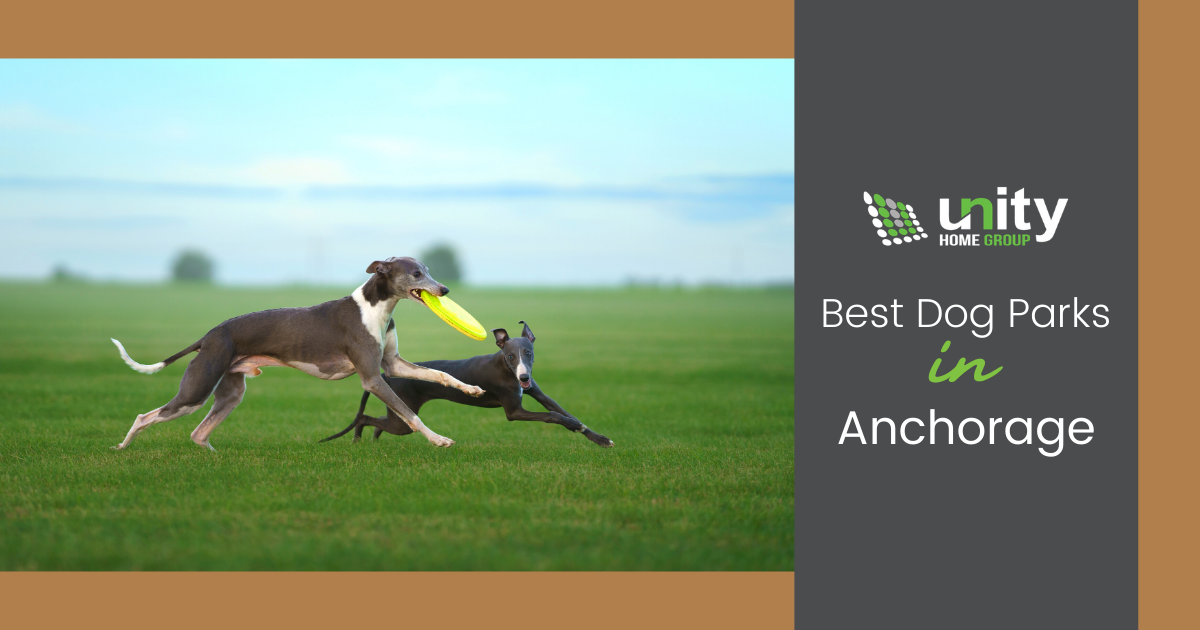 Anchorage is Alaska's largest municipality. About 288,000 people reside in the city, representing about 40 percent of the state's population. Anchorage's location along the Cook Inlet, and its many other lakes and inlets, have not only been instrumental in the city's early growth but have also added to its many outdoor recreational opportunities.

The city is known for its surrounding landscape, but it's also the state's hub for arts and culture, entertainment, dining, and retail establishments. Its natural beauty and urban amenities have combined to attract a growing population to its many condos, mountain view homes, and waterfront properties.

The Anchorage Parks and Recreation Department maintains 10,946 acres of parkland within the municipality, including 224 parks, with six parks containing designated off-leash dog park areas. Read on to find out which of Anchorage's dog parks may be the best fit for you and your dog.

Russian Jack Springs Park is about four miles east of downtown Anchorage. The park includes an off-leash dog park in the northeast corner of the larger park area. However, dog owners should ensure their dogs remain under their control and have excellent recall because the off-leash dog park area is not fenced.

Dogs are also permitted in other park areas, including the walking trails, but must be on a leash. Additionally, dogs must have their current vaccinations and be legally licensed to access any part of the park.

The dog park is a part of the larger 300-acre Russian Jack Springs Park and Golf Course, one of the city's oldest parks. The park includes a greenhouse complex, soccer fields, tennis courts, playground areas, picnic sites, and nine miles of biking and cross-country skiing trails. The park also includes a chalet, which acts as an event venue, warming house, and golf clubhouse, depending on the season.

The off-leash area of the park is in the northern section. Dogs are permitted in other areas of the park as well but must be on a leash. There is plenty of parking and easy entry and exit to the park. Dogs entering the park must have current vaccinations and be legally licensed.

Connor's Bog Dog Park is about five miles south of downtown Anchorage, close to the Ted Stevens Anchorage International Airport. The expansive park contains over 300 acres plus a lake.

The park is known for its many unpaved trails that meander around Connor's Lake. The trails are popular with dog owners whose canine companions prefer trails to open fields. Wildlife sightings are widespread in the park, including moose, so dog owners should have their dogs well-trained to voice commands and have their leashes available.

One of this dog park's unique features is that dogs can cool off by splashing around in the water. Off-leash dog activity is in designated areas only. As with all of Anchorage's dog parks, dogs entering the park must have current vaccinations and be legally licensed.

Valley of the Moon Dog Park

Valley of the Moon Dog Park is in Anchorage's midtown area, off West 17th Avenue, about 1.5 miles from downtown Anchorage. It is one of the city's most popular recreational areas. In addition to the dog park, Valley of the Moon boasts a playground, two picnic shelters, a community garden, an athletic field. The park features dedicated parking areas.

The city purchased land for the park in 1960, part of its Chester Creek Greenbelt acquisition. Over the years, park amenities like playgrounds, picnic shelters, walking trails, and ball fields were added.

The dog park is part of the larger 21.8-acre community park, and fencing around the dog park was recently upgraded. Dogs who visit Valley of the Moon Park must be up-to-date on vaccinations and legally licensed.

Dogs can enjoy off-leash trails in some parts of University Lake Park. In 2003, the park was chosen as one of six off-leash parks in the city. This designation changed the park from a quiet wilderness area to a vibrant, popular recreation destination.

The park is located about five miles southeast of Anchorage, near the university medical district and campus, and offers campus access. It consists of 64 acres, with wooded trails as well as open space. It is known for its scenic views of the nearby Chugach Mountains.

The land had previously been used in the 1960s as a site for gravel extraction to support the area's growing residential and institutional needs.

In the 1980s, Chester Creek was rerouted through the former gravel pit area, creating what is known today as University Lake. Shortly after this, the city acquired the land for recreational purposes. Today, it is one of the most popular off-leash dog parks in the city. Dogs entering the park must have current vaccinations and be legally licensed.

A portion of the park's trails may be closed to off-leash use on a seasonal basis, so dog owners should heed posted notifications. Dogs cannot swim for the protection of nesting birds and the park's active beaver population.

The city first purchased the land for the park in 1975 but didn't begin development until 1994. Until 2012, its athletic fields were a popular destination for team soccer play, though it is no longer used for that purpose.

The park's dog park space is fenced off, with separate areas for small and large dogs. There are also double-gated entrances for safely unleashing dogs.

Whisper Faith Kovach Park is considered a neighborhood-use park. It features a small play structure, parking area, and open green space in addition to the dog park. As with all parks, dogs entering the park must have current vaccinations and be legally licensed.

Explore Anchorage With Your Best Friend

Some of Anchorage's dog parks were created in open green spaces, while others feature specific trails designated for off-leash use by dog owners. In some parks, dog owners' use of trails may be restricted during the winter season, when trails undergo maintenance for various other winter recreational uses. Nevertheless, there are plenty of places in Anchorage to let dogs have some fun and exercise.

If you're looking to make your home in Anchorage, contact the Unity Home Group team with eXp Realty at (907) 885-3300 to get in contact with an Anchorage real estate agent and discover your Anchorage dream home today.